The Coalition vs. The Caucus

Woody King Jr. & Ruby Dee The Black, Latino & Asian Caucus (“The Caucus”) of the New York City Council was met by members of the ten groups that... The Black, Latino & Asian Caucus (“The Caucus”) of the New York City Council was met by members of the ten groups that comprise the Coalition of Theatres of Color (“The Coalition”) in response to information that four of its members were being eliminated for annual support. In an email sent to The Coalition, it was advised that the New Heritage Theatre Group, The H.A.D.L.E.Y. Players, The Paul Robeson Theatre and The Negro Ensemble Company would lose funding despite the fact that $800K had already been allocated to The Coalition in June 2009. Presenters for The Coalition were a veritable “Who’s Who”, not only in Black Theatre, but in Theatre, full stop, and included Ruby Dee, Voza Rivers, Woody King Jr., and Daniel Beaty. 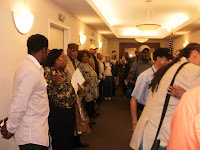 The Caucus, as a whole, claimed that they had no knowledge of the email that had been sent to The Coalition, and had no part in any decision to revoke the funding to these four theatres. The Caucus, Chaired by Council Members Robert Jackson and Maria del Carmen Arroyo, was surprised by the presence of The Coalition which, according to Councilman Jackson, was not on the agenda to present their case for that day. By sheer turnout, however, there was no way of turning away this group of people passionately united for this all-too-important common cause. Councilman Jackson conceded that The Caucus would give them time at the end of the scheduled meeting to present their cases and then The Coalition could schedule a formal presentation at a later date. 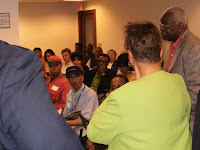 Representatives for the targeted theatres –– headed up by Chairman Voza Rivers, Executive Producer of the New Heritage Theatre Group – expressed their objections to being eliminated mid-season and presented their arguments for why they should continue to receive funding from The Council. These are theatres with long, consistently productive histories which have turned out iconic artists such as Sidney Poitier, Denzel Washington, Harry Belafonte, Ozzie Davis and Ruby Dee. A few members of The Caucus – Council Members Letitia James, Inez E. Dickens and Leroy Comrie – were particularly vocal in their support of funding these theatres and getting to the bottom of the confusion that caused these concerns in the first place. With additional support from Council Members Charles Baron, Robert Jackson, Albert Vann and Jumaane D. Williams the general consensus was that this situation would be clarified and resolved to the satisfaction of all parties.